To return to the "Genealogy in St. Louis" Web Site click here. 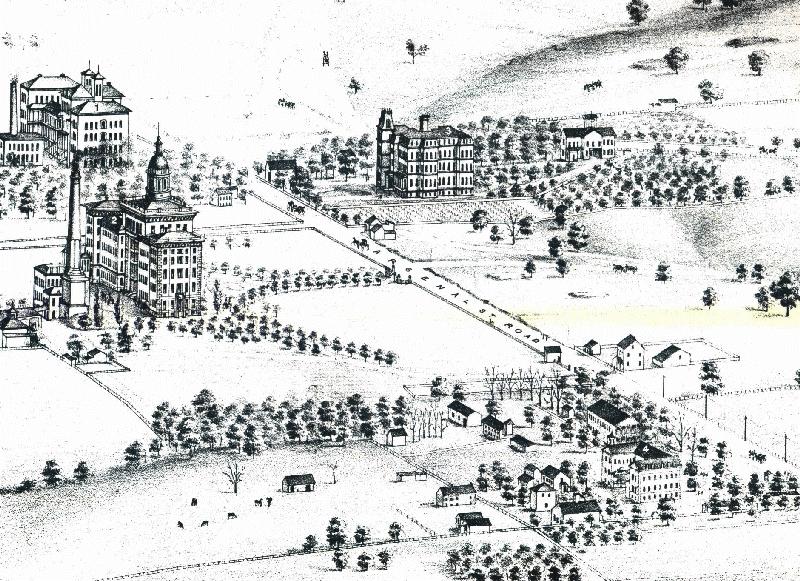 "This institution was for many years known as the Social Evil Hospital, and was erected in 1873, under the mayoralty of Hon. Joseph Brown, from a fund gathered under the provisions of the, now repealed, Social Evil Law. It is a handsome brick structure, costing over $100,000, and situated outside the city limits, at the intersection of the Manchester and Arsenal Roads. It was first used exclusively for the care and treatment of social outcasts, who, under the social evil law, were taxed for its support. Since the repeal of this law, which proved obnoxious to many of our citizens, it has been used as a female hospital exclusively, for the treatment of all the indigent and poor female sick of the city, from whatever disease or accident they may suffer. Dr. P. V. Schenck is the resident physician."

The image on the left depicts the various hospitals located on Arsenal Street, west of Kingshighway. The one with the dome is still intact. The building across the street was the "Social Evil Hospital".

In early 1870 the city of St. Louis legalized prostitution as a means to regulate it. A revised "Social Evil" ordinance was passed in June of 1871 which allowed for the construction of a separate hospital for the prostitutes. The Social Evil Hospital was opened in the fall of 1872. Due to its critics (from brothels to the religious), the city council nullified the Social Evil Ordinance in April 1874. In June of 1875 an ordinance was passed whose aim was to suppress, not regulate, prostitution. It was soon renamed the Female Hospital.

I recently came across the intake records from May 1876 (presumably the start of the new ordinance) where the majority of patients were not prostitutes, but normal female patients in need of health care. To show the apparent rebirth of the use of the hospital, the ledger starts with patient one.

I've completed the transcription of the first hundred patients. I've left out some of the more salient items in the ledger. If you find someone of interest let me know and I'll send you the full record.